“Chitterings. You taste burnt Iridium. Crawling closeness to the Entity. It guides you. Channeling. Folding. Writhing through itself, catch by rasping catch, to the tentacle trap. It hears you breathing, exhalations wrapped tight, rodent-panic clutching and sticky right up against the mammal-core. Oozing revulsion-sensitivities of the underside suck at your fear, each shrunken prey-breath countercoupled to labouring rasps, wheezes, grated-whispering, continuously re-watching, bubbling, clicking strobing centipede-nightmares, epidermal rasp of the unutterable heaving mass, a seething, clicking, poly-tendrilled abomination, slime-stroked gill-slits quivering, ticking, as they suck on the pitiful mammal sob, maimed ruins, beyond the screen, where it feeds you cannot know, and cannot stop knowing.

It is here that you are always peeled open, folding onto the outside, clicking, sucking, feeding, where you are all insides, raw, never numb, already dead, unreachable, limit, check, tick, where no protection can get, it feeds and sucks, leaving you locked outside your inside, with nothing to defend, fleeing the place you never leave, where it feeds and sucks, clicking, palpitating, mutual-multiplicitousness of intra-coiling malignancy that mottle and click, tick, feed, endlessly sucking on an ever opening rotten mass of ulceration, where nothing goes, unless to tick, feed, suck, and it can only think you hear, being so close, so it slithers groping through all your outsides, to be there already, when you arrive.

Past the age of hyperstition, we must prepare for an age of hypostition. Invocated unreality will rapidly attain the status of ubiquitous weaponisation, if it has not already done so.

“There’s a ghost that grows inside of me, damaged in the making. A hunt sprung from necessity, elliptical and drowned. Where the moving quiet of our insomnia offers up each thought, there’s a luminous field of grey inertia, and obsidian dreams burnt all the way down.”

Addiction and recovery may be conceived as two oppositional multiplicities, whose contrary alterations to the subject’s quality of life are as such as to call into question fundamental presuppositions regarding life’s qualities. A program of true recovery accordingly demands a radical ontographical process.

That both multiplicities are rhizomatic in nature, but arboreal in general conception, akin to a game of snakes and ladders – or downward spirals and twelve steps – speaks to the ontographical distance that must be crossed. Nevertheless, the twelve steps’ ultimate dissolution of addictive individuation speaks to their invaluable contribution, however paradoxical, to this process.

The Land of Clean Ginger

I imagine a huge city with houses of glass and steel, reaching the sky, reflecting the sky, itself and you. People cultivate their image, hurried and made up in the extreme, covered in gold, pearls and pure leather. In the streets, on every corner, the filth piles up and drugs accompany the slumber or rage of the outcasts.

All coming from female imagination
Daydreaming days in a daydream nation

Smashed up against a car at 3am
The kids dressed up for basketball beat me in my head
There’s bum trash in my hall and my place is ripped
I totalled another amp, I’m calling in sick

Thurston Moore’s lyrical nightmare of a bleary-eyed, psychogeographical stumble through the 1980s Lower East Side may be understood as the climatic realisation of (the) crack’s penetration on all levels: substance, space, subjectivity. The journey appears linear, as described in the album’s liner notes as the walk from his apartment to the recording studio, and yet reveals itself as circular, or perhaps he never left at all: “I’m out with the door / From Bowery to Broome to Greene…There’s bum trash in my hall and my place is ripped / I totalled another amp, I’m calling in sick.” The instability in the model of production is infectious and efflorescent, the phusis of addiction redistributing desires toward crack/s, from which bloom new models of value and new, permeable distinctions between life and death. Small Flowers Crack Concrete . Such re-circuitry reflects and remodels geographies, establishing concrete divisions – between, for example, public/private or upmarket/downmarket as liminal sites of trade/administration and thus safety/danger. Such re-circuitry is, by another name, Deleuze and Guattari’s concept of “folding:”

Folding is movement through a liminal condition whereby one thing “folds” into another. A spatial labyrinth is a multiplicity of spatial folds where the twists and turns of lanes and alleys disorients and produces a mix of desire/danger. The “folds” of the “labyrinth” are its “labia” where a dominant order folds into sites of slippage and danger; where one loses the controlling gaze over spatial order. Smooth spaces are derelict spaces; “cracks” in the instrumentalised habitat; holes in the socially structured habitus ; paradoxical places/spaces of desire and danger.

Substance-induced hallucinations of surrealism and violence pulsate through space and into subjectivity – “I’m a walking lizard / last night’s dream was a talking baby wizard” – and into the ambiguities of paranoia: “smashed up against a car at 3am / the k ids dressed up for basketball beat me in my head.” Is this an account of being in an automobile collision and mugged? Or is this account of being “smashed” – intoxicated – leaning against a car, imagining oneself being defeated in basketball? When you’ve cracked up, the difference is negligible, if not nil. Subjectivity and objectivity’s opposition is fractured – cracked – in folding, establishing new points of sensation-al connection as well as solipsistic impressions of isolation, despite a late-/capitalist mode of production’s efforts toward a predictable, governable system of perpetual motion. As Mark Fisher reflected, “there is no inside except as a folding of the outside; the mirror cracks, I am an other, and I always was.” The crack is always -already in the addict, the capital, the city, the subject, the object and, yes, the Grand Canyon. 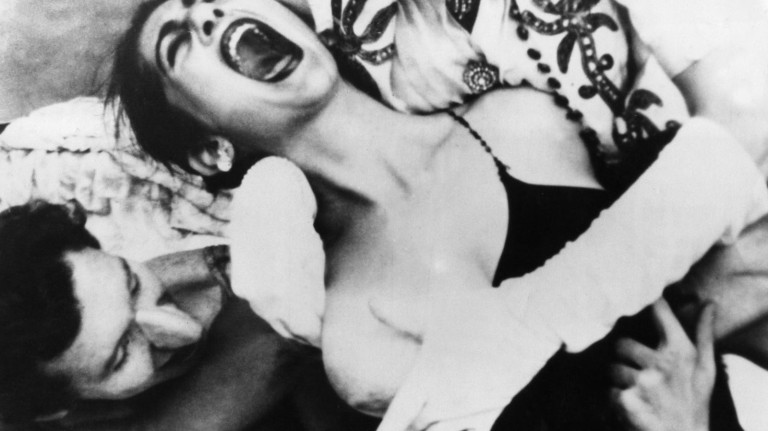 Flaming Creatures‘ queer “placeless and timeless” aesthetic was to such an extent that Jonas Mekas reported hearing it erroneously described as a “’remarkable first public screening of a film made fifty years ago.’”

Flaming Creatures continues in its ambiguities, “casually blurred genders and abstract body tangles…There’s a serious lack of gravity, an absence of perspective…[for such graphic sexuality] Flaming Creatures is notable for its absence of tumescence.”  Naturally, considering the prominence given to a scene of cunnilingual rape and, later, a drag queen Marilyn Monroe vampire, feeding on and resurrecting the titular creatures, we once again encounter instances of oral and genital love/sadism confusion. This time encountering an actual vampire, rather than simply passing reference to the vampire’s devotee as in Blonde Cobra , we come face-to-face with an icon of queer time: animated non-linearity, disrupted futurity and alternative (to) reproduction. However, the key to grasping the full potential of Flaming Creatures as opposition to the normal society that might be ensured through the psychoanalysis of children lies not just with queer sadomasochism and supernatural creatures but within the film’s aesthetic, both at its most avant-garde and also, perhaps surprisingly, at its most conventionally cinephilic.

To summarise briefly Jean- Louis Baudry’s “Ideological Effects of the Basic Cinematographic Apparatus, ” cinematic specificity is defined by mechanical processes which act to mystify the transformation of an “objective reality” into individual photographic images with Renaissance perspective, and then into a fluid, singular stream of coherent vision and narrative. Accordingly, the cinematic-spectatorial process is founded upon multiple psychological fictions, only one of which has anything to do with the story itself. Thus, although it may be argued by Klein and others that a fundamental aspect of development out of infanthood is the discarding of phantasy for reality, there remains a dominant culture of fantasy, functioning wholly on the obfuscation of the divide between reality and fiction.

In Flaming Creatures, Smith employs multiple techniques which could paradoxically be classified either as narratologically-justified formalism or as veritable verfremdungseffekt – as P. Adams Sitney describes:

In the ﬁrst scene, as figures pass back and forth in front of a poster on which the credits of the ﬁlm have been ornately written, the grey, washed-out picture quality gives the impression that he was filming in a cloud. The narrowing of the tonal range obscures the sense of depth, which Smith capitalizes on by cluttering the panning frame with actors and with details of limbs, breasts, a penis, and puckered lips so that not only depth disappears but the vertical and horizontal coordinates as well.

Indeed, through processes of visual abstraction, non-professional acting, obviously painted sets and the extreme disturbance of the rape scene itself, with the victim’s screams battling and besting the score’s control of the aural space, Flaming Creatures proves a challenging spectatorial experience, whose effects of interpellation and alienation oscillate wildly throughout its 43 minutes. Simultaneously affective, however, is Flaming Creatures’ overt reference to recognisable Hollywood tropes, in their most concentrated forms. Sitney again:

Flaming Creatures deliberately manifests what [Smith] ﬁnds implicated in Maria Montez’s and von Sternberg’s ﬁlms, and without the interference of a plot. When he brings to the fore what has been latent in those ﬁlms— visual texture, androgynous sexual presence, exotic locations (the Araby of Montez’s ﬁ ms or the Spain, China, and Morocco of von Sternberg’s)— and at the same time completely dis cards what held these ﬁlms together (elaborate narratives), he utterly transforms his sources and uncovers a mythic centre from which they had been closed off.

Indeed, by making such references to the camp potential of Montez and Sternberg, whilst eschewing the “serious” elements of the plot, Smith’s cinema does not just showcase the drag performances of its cross-dressing and/or otherwise openly mannered actors, but it in fact may be understood to characterise the Hollywood aesthetic with just the same mindful, parodic drag performance as defined by Bornstein. The mindfulness of this performance, as well as its disregard for the carefully constructed stories of its source material goes some way to address and challenge the interpellative nature of these hegemonically-sanctioned fantasies, whilst giving space to the riotously confused, queer and violent phantasies of neurotic children with homosexual tendencies who would be “cured” by psychoanalysis. The American underground’s camp, queer position in relation to Hollywood (not just limited to Smith and Jacobs but also George Kuchar and Kenneth Anger to name but two others) is defined by Hoberman as an “obsessive ambivalence,” a term which, aptly enough, is nothing more than a succinct condensation Klein’s description of Erna’s relationship to her own parents. Perhaps this truly reflects the position of the American underground drag cinema in contrast to its Hollywood parent figure: challenging the transcendent ego of interpellative conventional narrative and form, parodying the super-ego of heteronormative hegemony and linear time, and revelling in the unbridled phantasy of a destructive id.

Black snow is when all the talking heads dissolve into Chaos TV
When all broadcasts converge on noise
When all signals have been interrupted
When things without order or shape flood out of the snow-blind monitors
Out of the static, the silent howling of the Tohu Bohu Show

Zeroing in on you

That’s what we foresee
A wave of black now
An impending absolute collective blindness
And from among the tatters of electromagnetic shadow
Seething out of the lost signal
Pour the chaotic myriads
To return the earth to its sub-primordial state.

Nothing comes out of the black snow.”

“On a dark night, Kindled in love with yearnings—oh, happy chance!—
I went forth without being observed, My house being now at rest.

In the happy night, In secret, when none saw me,
Nor I beheld aught, Without light or guide, save that which
burned in my heart.

This light guided me More surely than the light of noonday To the place where he (well I knew who!) was awaiting me — A place where none appeared.

Upon my flowery breast, Kept wholly for himself alone,
There he stayed sleeping, and I caressed him, And the fanning of the cedars made a breeze.

The breeze blew from the turret As I parted his locks;
With his gentle hand he wounded my neck And caused all my senses to be suspended.

I remained, lost in oblivion; My face I reclined on the Beloved. All ceased and I abandoned myself, Leaving my cares forgotten among the lilies.”

– St John of the Cross